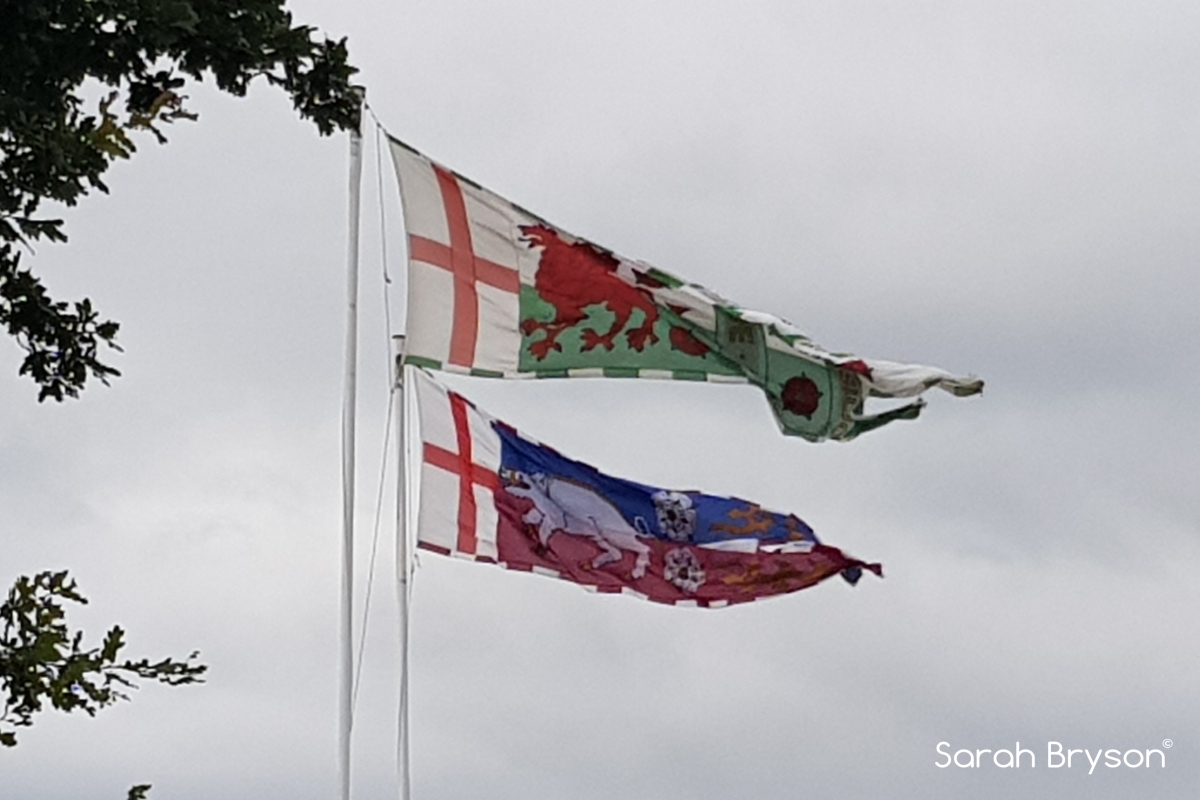 The Brandon men, father Sir William Brandon and his three sons, William, Robert and Thomas, had been loyal servants to King Edward IV. The king died on 9th April 1483 and his successor was his twelve-year-old son, Edward. However, the new king’s Uncle, Richard of Gloucester had the boy and his younger brother, Richard of York, declared illegitimate due to a precontract his brother had with Lady Eleanor Butler. As the late king’s only legitimate heir, Richard was asked by Parliament to take the throne and he was crowned King on 26th June 1483.

With a new King on the throne, the loyalties of the Brandon men lasted less than a year.

During the summer of 1483 a rebellion was planned against Richard III. Henry Stafford, 2nd Duke of Buckingham had been convinced by Dr John Morton, Bishop of Ely, to switch his allegiance from Richard III to Henry Tudor, the Lancastrian claimant in exile. It should be noted that Dr Morton was an associate of Sir William Brandon and it is highly probable, with the following events, that Morton and Brandon spoke about Brandon’s participation and support in the rebellion. The Brandon men decided that the oldest son William, and his youngest brother Thomas, would join the Duke of Buckingham’s rebellion.

The rebellion was set to begin on the 18th of October however rebels in Kent rose early and began to march to London. In response Richard III sent John Howard, Duke of Norfolk to crush the rebels. It was planned that Buckingham and his men would meet up with supporters in the West. The weather was horrid and continual rain caused the rivers Severn and Wye to break their banks, flooding the surrounding lands making it near impossible for Buckingham to progress. With his soldiers beginning to retreat Buckingham knew the cause was lost and he fled. He was betrayed and quickly arrested, beheaded in the market place at Salisbury on the 2nd of November.

At the end of 1483 or early 1484 William and Thomas Brandon left England and headed to Brittany to join Henry Tudor. The actions of the Brandon sons clearly showed that they believed themselves to be in danger. However, on the 28thMarch 1484, a general pardon was granted to William Brandon II.

It is unknown if the pardon was issued before or after William Brandon left England to join Henry Tudor. If it was before and William knew of it, it may be that he did not trust Richard III. Or perhaps it was simply too late and Brandons had no knowledge of the pardon. Either way William Brandon II and his younger brother Thomas had thrown their lot in with Henry Tudor.

Less than a month later, on the 11th April William Brandon II was being referred to as a rebel in government documents. Three months later on the 7th July an act of Attainder was passed on William Brandon II. The act stripped Brandon of all his land, manors, property and wealth, which reverted to the Crown. In addition to this, the act charged Brandon with high treason. If caught his sentence would be death.

While this was happening William’s father, Sir William Brandon fled into sanctuary at Gloucester. Unfortunately, it is unknown what Robert Brandon, the middle son, was doing during this time. Perhaps he was simply laying low, trying to keep out of Richard III’s gaze.

On the 1st of August, after fourteen years of exile, Henry Tudor set sail from France to lay claim to the English throne. He set sail from the port of Harfleur accompanied by approximately 2,000 soldiers, one of those being William Brandon II.  It is unknown if Thomas Brandon accompanied Henry, there are no records of him over the next few months. If he did not travel with his brother, it may be that he remained in France with William’s wife and newborn son, the future Charles Brandon, Duke of Suffolk.

The fleet landed on the 7th of August at Mill Bay six miles west of Milford Haven located along the Pembrokeshire coastline. Over the next two weeks Henry Tudor and his men marched across England gathering support and soldiers as they went. On the 21st August Henry chose to knight several men who had shown great loyalty to him throughout his time in exile, one of these men was William Brandon II.

The Battle of Bosworth Field took place on the 22nd of August 1485. It is estimated that Henry had an army of between 5 – 8,000 soldiers and Richard III had 12 – 20,000 men. Thomas and William Stanley had a combined force of approximately 6,000 men but they had not yet committed to either side. Sir William Brandon had been chosen to be Henry’s standard-bearer.

The battle was fierce and as the battle continued Richard III, despite being told to flee, saw an opportunity to charge at Henry Tudor. As he and his men surged forward, his aim to bring down Henry, his lance pierced Sir William Brandon II and broke in half. History records that William Brandon ‘hevyd on high’ [the Tudor standard] ‘and vamisyd it, tyll with deathe’s dent he was tryken downe.’

Sir William Brandon II had given up everything to join Henry Tudor’s cause. Richard III had passed an Act of Attainder upon him, his land, his property and wealth forfeited and his life worthless. He had bid goodbye to his wife and baby son, sailed to England and ultimately given his life fighting for Henry Tudor’s cause.

Richard III and his men continued fighting and it was at this point that William Stanley and his men charged down in support of Henry Tudor and the rival armies clashed. At some point, Richard III was killed.

After Henry was declared victorious, he ordered that all those who had died to be buried, many of those being at the nearby church of St James the Greater, Dadlington.  Sir William Brandon II was the only member of nobility on Henry Tudor’s side killed at Bosworth. Unfortunately, the exact location of Brandon’s grave remains unknown.

While the fortunes of the Brandon men had suffered under the reign of Richard III, with William Brandon II losing his life, when Henry VII claimed the throne fortune’s wheel turned upwards for the surviving Brandon men.

Henry VII reappointed Sir William Brandon I to the position of Marshall of the King’s Bench, of which he had been dismissed by Richard III. In addition to this he knighted Robert Brandon in 1487 and Thomas Brandon in 1497. He also trusted all three surviving Brandon men with overseeing various judicial matters across the country.

In 1499 Thomas Brandon was appointed as Master of the Horse, a position he was reappointed to under the rule of Henry VIII.  In January 1503 Sir Thomas was part of a select group of ambassadors sent to meet with Maximillian I, Holy Roman Emperor in order to discuss the Emperor becoming a member of the elite Order of the Garter. He was also tasked with trying to persuade the Holy Roman Emperor not to support the staunch Yorkist, Edmund de la Pole, 3rd Duke of Suffolk.

In addition to all of this, in April 1507 Sir Thomas Brandon was elected into the Order of the Garter and also appointed as Marshal of the Court of Common Pleas.

The fortunes of the Brandon men suffered greatly under the rule of Richard III. For whatever reason the family became dissatisfied with Richard III. Perhaps they believed he did not deserve to be King, thinking instead the throne should have passed to Edward IV’s son. Or maybe they were simply unhappy with how Richard III sought to rule the country. For whatever reason the Brandon men threw their lot in with Henry Tudor. They had lost their freedom, their land and property and William Brandon II lost his life, but in 1485 their gamble paid off when Henry VII proved victorious at Bosworth. The first Tudor king proved to be a loyal King and lifted the Brandon men back to prominence.

Sarah Bryson is a researcher, writer and educator who has a Bachelor of Early Childhood Education with Honours. She currently works with children with disabilities. She is passionate about Tudor history and has a deep interest in the Brandon family who lived in England during the 14th and 15th centuries.  She has previously written a book on the life of Mary Tudor, sister of Henry VIII and wife of Charles Brandon, Duke of Suffolk. She runs a website and facebook page dedicated to Tudor history. Sarah lives in Australia, enjoys reading, writing and Tudor costume enactment.

Brady, Maziere, The episcopal succession in England, Scotland and Ireland, A.D. 1400 to 1875: with appointments to monasteries and extracts from consistorial acts taken from mss. in public and private libraries in Rome, Florence, Bologna, Ravenna and Paris (Rome: Tipografia della Pace, 1876).

Calendar of State Papers Relating To English Affairs in the Archives of Venice, (London: Her Majesty’s Stationery Office, 1871).

Campbell, William, Materials for a history of the reign of Henry VII: from original documents preserved in the Public Record Office (London: Longman & Co, 1873).

Clowes, William, Report of the Deputy Keeper of the Public Records, Volume 9 (London: Clowes and Sons, 1848).

Gairdner, James, History of the Life and Reign of Richard the Third (Cambridge: University Press, 1898).

Harris Nicolas, Sir Nicholas, History of the Orders of Knighthood of the British Empire; of the Order of the Guelphs of Hanover; and of the Medals, Clasps, and Crosses, Conferred for Naval and Military Services, Volume 2 (London: John Hunter, 1842).

Hutton, William, The Battle of Bosworth Field, Between Richard the Third and Henry Earl of Richmond, August 22, 1485 (Fleet Street: Nichols, Son, and Bentley, 1813).