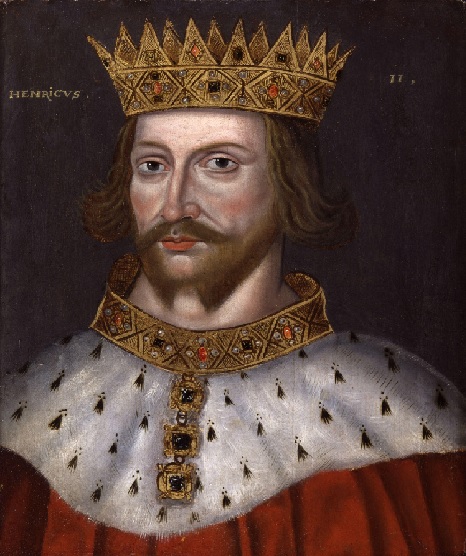 Henry II was King of England from 1154 until his death in 1189. He ruled a vast empire and laid the foundations for the Common Law in England but also struggled with rebellions led by his own children and his wife and was, in his own time, despised by the country. There is a little known story about Henry, though, which is as surprising for what it didn’t come to mean as what it did come to mean.

It is reported by several sources, including Gerald of Wales (c1146-c1223) that King Henry brought about the discovery of the tomb of King Arthur, the legendary Once and Future King. The first problem with the story is that reports place the discovery between 1191 and 1193. If these were correct, it would have been after Henry’s death and therefore it would be odd to attribute it to him. Gerald of Wales asserts that “King Henry II of England disclosed to the monks some evidence from his own books of where the body was to be found”, so either Henry searched for it but it was not found until after his death, the discovery attributed to the knowledge he had provided, or the dating of the discovery is a little out.

Either way, the grave was discovered at Glastonbury, a place in Arthur’s time called the Isle of Avalon. Gerald tells us that in the old English, this means Apple Tree Island, for “truly that place abounded in apples”. The monks discovered the grave between two stone pyramids, fully 16 feet into the ground as many of Henry’s sources had suggested it would be. Inside that grave was a large stone cross, which Gerald tells us “I have seen”, upon which was carved; “Here lies buried the famous King Arthur with Guinevere, his second wife, in the isle of Avalon”. The male skeleton was said to be of enormous proportions and a lock of golden hair identified the other body as a female. There was also a sword within the grave. The sword of King Arthur. The legendary Excalibur. Legend said that it had been returned to the Lady in the Lake, yet here it was, buried with Arthur and his wife.

Henry II suffered many rebellions and Wales was amongst those areas that he struggled to control. Welsh princes supported English uprisings and resisted Henry’s rule, clinging to the notion of the Once and Future King, who would return to avenge them against the English oppressors. Henry’s ‘discovery’ of Arthur’s grave, then, served to put beyond doubt the myth of Wales’ immortal hero. He had been a man, and he was dead. There was proof. Arthur was not going to return to save Wales. The message from Henry was clear enough.

Why did the monks of Glastonbury agree to the almost doubtless sham? Well, a couple of years before the discovery the Abbey church had been destroyed by fire and funds were required to rebuild it. What better way to raise funds than pilgrimages? What better find to draw pilgrims that the most revered king in English legend? It is worth noting that around this time Glastonbury also saw the discovery of the remains of, amongst others, St Patrick, St Indract, Saint Brigit, St Gildas and St Dunstan. So the monastery’s motive is also easy to fathom.

I can’t help wondering, though, whether King Henry missed an immense PR opportunity. He used the discovery to quash Welsh rebellion but could he have used it to make his own reputation? Henry was the son of Empress Matilda and grandson of King Henry I. When Henry died he had named Matilda his heir but her cousin Stephen had swooped to have himself crowned king and firmly dug in his heels. After years of simmering civil war known as The Anarchy because of the vacuum of power and justice that flourished while the greatest men and the greatest woman in the land squabbled over the crown, Henry became king at the age of 21. Stephen had been forced to submit that following his own death, Matilda’s son would become king and all hoped that the festering wounds afflicting the country might begin to heal. Henry reigned for almost 35 years and his legacy now is much more respected than it was at the time.

Henry’s wife, Eleanor of Aquitaine, egged on her favourite son, Richard, who wanted power sooner rather than later. Henry favoured his youngest son John. Eleanor spent long periods imprisoned by Henry and Richard rebelled more than once. Henry, then, had plenty of problems within his own family as well as in the country. He was the first Plantagenet king, son of Matilda’s second husband Geoffrey of Anjou, who was named for the sprig of plant he always wore, his planta genet. England had been at war for years and Henry was far from English as he tried to unite his new kingdom.

I would imagine that the discovery of King Arthur and Excalibur could have served a far greater purpose for Henry. He was attempting to bring together an empire under one banner, as Arthur had done. He was a great law maker, as Arthur had been. I wonder whether Henry might have been better served by embracing the discovery as a defining marker of his kingship, by comparing himself to Arthur and seeking to inspire those opposed to his rule rather than simply crushing Welsh hope. If Henry had been blessed by the discovery of Arthur’s grave and the mystical sword Excalibur had come to him, would this not mark him as an heir to Arthur’s legacy and the power that Excalibur represented? Could it have provided an inspiring new start for the new dynasty?

Yet there is no evidence that Henry sought to use the discovery in that way. Possibly this is because he did not survive to see it or perhaps he simply did not choose to view it that way. To me, this seems like a wasted opportunity.

What of the remains of Arthur and Guinevere? Gerald of Wales asserts that the lock of blond hair, “when a certain monk snatched it greedily with his hand and raised it up, at once all of it crumbled into dust”. The monks at Glastonbury kept the bones in an ornate wooden chest and pilgrims flocked to see it. Later, during the reign of Edward I, a black stone sarcophagus was placed next to the High Altar and the bones re-interred. The monastery was dissolved by Henry VIII, the last Abbot hung drawn and quartered for treason. There is no record of the fate of the bones. Perhaps the brothers managed to move them to a secret location before Cromwell’s men descended. Perhaps King Arthur now rests in some other location, safe until he is needed again by his nation.

The stone cross which was found in the grave and identified its occupants was preserved and better documented. That does not mean that it was not a forgery, but it is fairly well recorded by many chronicles over the following centuries. It was last recorded in the possession of William Hughes, Chancellor of Wells in the early 18th century. Then, it disappeared.

And the mighty Excalibur? The story goes that Henry’s son, Richard I gave the sword as a gift to Tancred of Sicily in 1191 (which again throws doubt upon the dates of the find). It would be an odd fate for the most powerful sword in English history and all that it represented to be given away to a foreign ruler. Of course, if the grave had been found in 1191 and King Richard made aware, he seems to have been less than interested. Perhaps that reflects his lack of attachment to the country that called him Lionheart but where he spent almost no time.

So it is that King Henry II found a Welsh legend to destroy his myth but passed up the opportunity to attach his own reputation to the most enduring story in English history. The Plantagenets ruled for over 300 years and remain the longest ruling family in England’s history. Perhaps they did not need Arthur to bolster them, or perhaps they did not want to attach themselves to him, preferring to stand proud as Plantagenets.

It is interesting too that when Henry Tudor ended Plantagenet kingship in 1485, he named his first son, born the following year, Arthur. The promise was clear. The Plantagenets had crushed Arthur’s memory. The Tudors were returning it. There was to be a new King Arthur to save England.