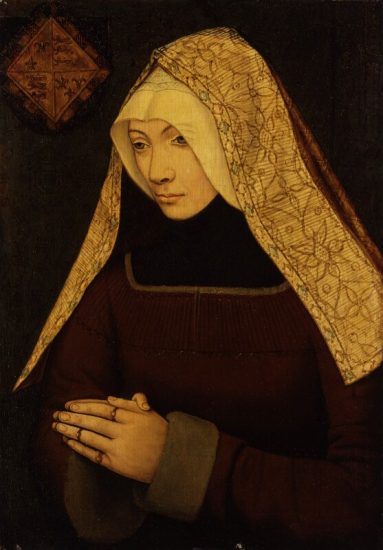 Margaret Beaufort, Countess of Richmond and Derby, and mother of King Henry Vll seems to have earned a poor reputation over time.  Often thought of as the cruel and conniving “Lady Margaret The King’s Mother”, she seems the epitome of the rotten mother in law. And she certainly may have been so to her son’s wife, Elizabeth of York. But what was it that made her this way? Her life as a child and a young woman were far from a fairy tale so perhaps understanding what she was forced to endure can provide us with an explanation of why she was so bitter. And perhaps we can form a different opinion of Margaret and look at her as a lady of great strength and perseverance and as a woman who believed in her cause and would pursue that cause with everything she had.

Margaret was born in May of either 1441 or 1443 in Bedfordshire England to John Beaufort, Duke of Somerset and Margaret Beauchamp of Bletso. At the time of her birth, her father had gone to France for a military expedition for King Henry Vl. However, after his return from France, he was banished from court on charges of treason. He died shortly afterwards but it is still unclear if he died of an illness or apparent suicide. Margaret would inherit all of her father’s fortunes as she was his only heir.

However, King Henry Vl would go against John Beaufort’s wishes and grant wardship of Margaret’s lands to William de la Pole, First Duke of Suffolk.  De la Pole was a military commander and favorite of The King.  While Margaret would remain with her mother, an attempt to marry her to de la Pole’s son was made in early 1444.  She was no older than three years. Papal dispensation was granted in 1450 but the marriage was never recognized.  Henry VI then granted Margaret’s lands to his own half brothers, Edmund and Jasper Tudor.  He also decided Margaret would marry Edmund, who was eleven years older than her.

In November of 1455, the wedding took place and Margaret would become the twelve-year-old bride to the twenty-four-year-old 1st Earl of Richmond. In the 1400s, twelve was the age of consent however it was unusual for the marriage to be consummated before the age of fourteen. Consummation before age fourteen was considered a risk to the health of such a young woman. Margaret was said to be rather small with a petite frame.  However, Edmund Tudor felt otherwise and chose to consummate his marriage immediately. One would have to imagine this must have been a terrifying ordeal to such a young girl, but throughout her life, Margaret consistently defended Edmund as her first husband. So perhaps he was kind and treated her well. And perhaps Margaret accepted this as her destiny, to be married off at such a young age. This was also a time of great political unrest as The War of the Roses had broken out and being a Lancastrian, there is a strong suggestion that Edmund Tudor was only interested in an heir.  Whatever the situation may be, Margaret was forced to become a woman at a very young age and was able to find the strength within herself to rise up to the challenge.

Margaret’s husband was unfortunately taken in by Yorkists and held prisoner where he would die of the plague in early November of 1456. His thirteen-year-old widow was seven months pregnant and alone. Lady Margaret was taken in by her brother in law, Jasper Tudor where she would give birth to the future King of England on January 28, 1457. However, Margaret’s labor was incredibly difficult, probably due to her small stature.  The midwives were concerned that neither Margaret, nor her son Henry, would survive the birth. This must have terrified the young mother, as she would never give birth again. 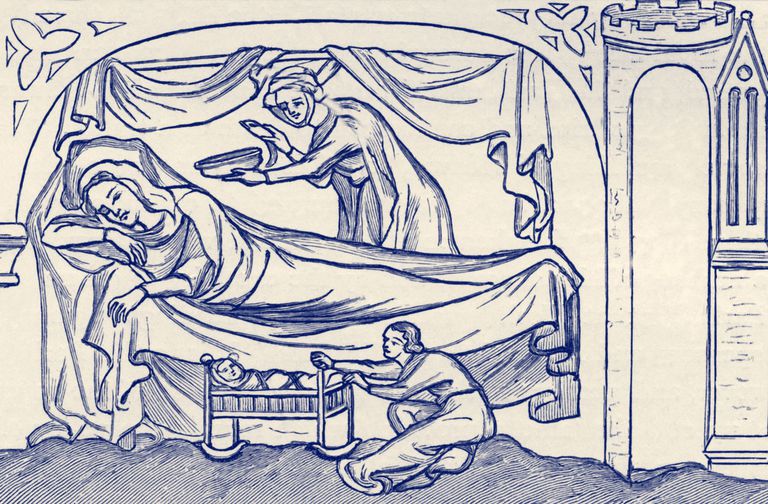 Mother and son remained at Pembroke Castle until, at the age of two, Henry Tudor went to live with the Yorkist Herbert family in Wales. At age fourteen, he was forced into exile in France.  Edward IV, the Yorkist King was on the throne but Margaret’s son Henry Tudor had a legitimate claim as well.  Margaret Beaufort’s royal bloodline connected her to John of Gaunt, Duke of Lancaster as well as the great King Edward III. John Beaufort, Henry’s maternal grandfather might have been next in line for the throne after John of Gaunt’s children from his first two marriages. While some may argue that Henry Tudor had no claim, the royal bloodline was indeed there.

Margaret would marry again just a year after her son’s birth.  Sir Henry Stafford, second son of the 1st Duke of Buckingham,was Margaret’s husband for more than ten years. While it is believed that they enjoyed a rather harmonious marriage, Sir Henry was killed by injuries received in battle in 1471.

In June of 1472, Margaret would wed yet again, to Thomas Stanley, Lord High Constable and this marriage would allow her to return to the court of Edward IV and his Queen, Elizabeth Woodville.  Edward IV was a Yorkist King with a Lancastrian wife and this would prove helpful in Margaret Beaufort’s attempts to put her son on the throne.  Edward IV had married Elizabeth Woodville for love and when he died in 1483 from illness, his son Edward was in line to take the throne. But King Edward’s brother Richard took the throne from his nephew. Richard fell into dispute with the Woodville family and feared that the King’s widow, Elizabeth, would turn her son against him.

Henry Tudor was now in his mid-twenties and the only Lancastrian with royal blood. Many saw Henry as the only one fit to rule. His mother Margaret was one of them. And she had the help of Elizabeth Woodville. When Richard seized power, Elizabeth found sanctuary in Westminster.  It was rumoured that the King had locked both of his nephews in the Tower of London in fear that they would steal his crown.  Believing both her sons to have died in the tower, Elizabeth joined forces with Margaret Beaufort in a plot to put Henry Tudor in what they believed was his rightful place. These two strong-minded women devised a plan to marry Henry to Elizabeth Woodville’s daughter, Elizabeth of York. This would unite the houses of York and Lancaster and give Henry Tudor even more claim to the throne as the people of England would have a Yorkist Queen and a Lancastrian King.

Margaret Beaufort would become the driving force behind bringing Henry Tudor to his crown. She had an affectionate relationship with her son and would send him letters as well as funds to build his army. With the support of the Woodville family, Henry engaged a small French and Scottish force. Henry also had the support of the Welsh people and was able to gather an army of 5000 troops.  But some of the most important support he would gain would be that of his stepfather, Thomas Stanley. Stanley had been an early supporter of Richard III but would ultimately end up abandoning him and joining forces with Henry Tudor.

On August 22nd 1485, in the early hours of the morning, Henry Tudor and his army would march into battle and defeat Richard III in what would become known as the Battle of Bosworth. It was Henry’s stepfather himself who placed King Richard’s crown on Henry’s head after he fell from his horse and was killed. 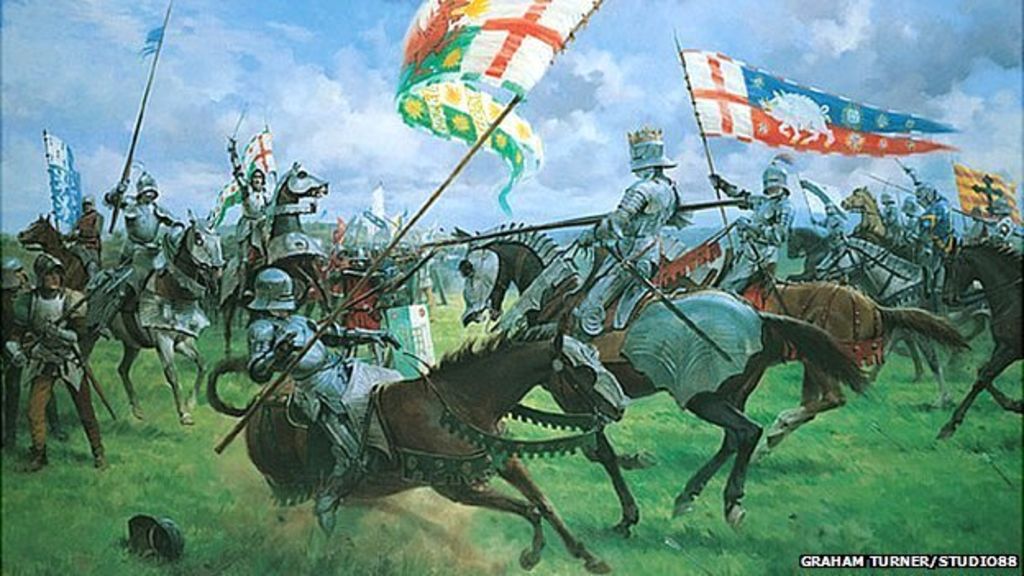 We can imagine the joy Margaret Beaufort must have felt in knowing that her son was finally crowned King of England. She firmly believed that her son should be on the throne and had plotted successfully to put him there.

Margaret Beaufort’s childhood had been one of extraordinary difficulty. She lost her father at a very young age and forced to marry and be widowed several times. It can be understood that Margaret must have felt like all the odds were against her, yet she grew stronger from it. She was the perfect example of the devoted mother who will stop at nothing to help her child.  And while this may have proved difficult for her daughter in law, she did continue to remain one of Henry’s closest advisors during his reign.  We can assume the bitterness she was known for could have been from a life of constant struggle and the fear that someone would take what was hers; a son on the throne of England.

Margaret must have held the memories of her early marriage and childbirth with her. For when there were talks of her granddaughter’s marriage, Margaret became a strong advocate in assuring that the young girl did not go through the same harrowing experience of childbirth at such a young age. Margaret also played an important part in education during her life as she was the founder of several schools across England. Margaret Beaufort should continue to remain a symbol of strength for many women. She remained steadfast and determined and never lost her faith during a time of turbulent and political unrest.